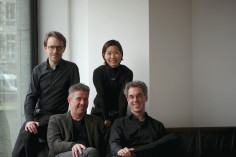 The Mannheim String Quartet was founded in 1975 in Mannheim, and owes its name not only to its birthplace but also to the “Mannheim School”, which was significantly involved in the development of the string quartet genre, and closely associated with the music of Mozart.

The Mannheim String Quartet won many prizes during its student years and went on to establish itself firmly in the German and the international music scene, receiving invitations to the most important German festivals such as the Schleswig-Holstein Festival and the Berliner Festwochen, and touring throughout Europe and Asia.

Radio broadcasts and CD recordings play an important role in the work of the quartet. The standard of their recordings has been recognized by prizes such as the Echo Klassik and the Deutsche Schallplattenpreis.

The Mannheim String Quartet is currently resident in the city of Essen.