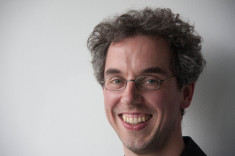 Sebastian Bürger learned the violin from a young age and took up the viola at the age of 12. He studied with Prof. Rainer Moog at the Musikhochschule in Cologne and with Prof. Diemut Poppen in Saarbrücken. He continued his education with Prof. Paul Neubauer at the Mannes College of Music in New York, supported by a scholarship from the German Academic Scholarship Foundation. He studied chamber music with Prof. Konrad Grahe in Essen, and with the Melos Quartet and the Alban Berg Quartet. As a long-term member of the Signum Quartet he received a scholarship from the Villa Musica Foundation and the Werner Richard-Dr. Carl Dörken Foundation, and won many prizes including the Preis des Deutschen Musikwettbewerbs in 2004.

His first professional orchestral experience was with the Gürzenich-Orchester in Cologne. Since 2003 he has been Principal Violist with the Essener Philharmoniker and plays regularly as guest principal with the radio orchestras in Frankfurt and Munich, and with the operas of Leipzig, Stuttgart, Hamburg, and Munich. In 2003 he began teaching at the Musikhochschule in Detmold, and from 2005-2012 taught at the Folkwang University of the Arts in Essen.